If you liked this song you should also enjoy The Laryngospasms:

Waking up is hard to do:

Succoth (The festival of Tabernacles) and Gilad Shalit is there a connection? I believe there is.


Shalit is an Israeli soldier abducted by the Hamas over 3 and a half years ago. His release has been the subject of prolonged negotiations. Too prolonged. Our previous Prime Minister (a complete failure if ever there was one) didn't have any idea how to conduct business. What he should have done was to demand proof of life before agreeing to negotiate. That is how hostage negotiations are conducted.  If it were up to me we would have released terrorists from our jails, in pieces, until such proof was provided. Barbaric? Yes, that's how one speaks to barbarians in the language they can understand. They don't understand gestures of goodwill, the concept is beyond them. Be that as it may, we have finally received proof of life in the form of a video clip. The connection to Succoth is this:  One of the symbolic aspects of the holiday is to remember and recreate the temporary dwellings of the Children of Israel as they wandered in the desert after being freed from the bondage in Egypt. This collective memory is to be cultivated and taught throughout the generations. It is fitting that the video confirming that Gilad Shalit is indeed alive, was released on the eve of the holiday.

Here is the Succah I built this year: 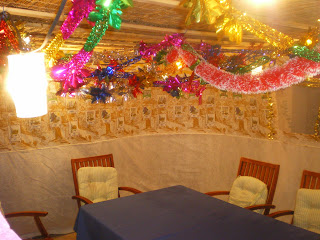 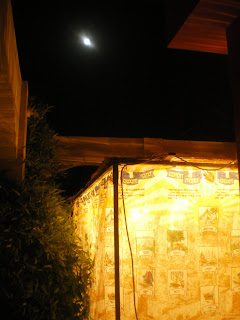 My parents recently returned from a vacation in Italy.  My mother describes the following surprising scene:  After climbing an endless flight of stairs in Rome, she was rewarded with the sight of a wonderful statue.  She then snapped the photo of said statue: 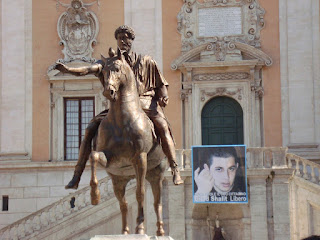 Then she noticed in the background a familiar image: 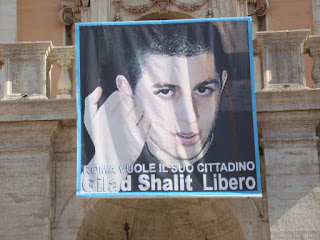 And may God grant Rome's citizen freedom, and soon.