Over a year has passed since my last post. During this last year, angst engulfed me. But more about that in another post, if I get around to it.
We are on a family vacation in Romania and it's been mostly awful. First of all, because of the war, and the fact that our hospital is the closest to the fighting, all senior physicians need permission from the director of the hospital to leave the country. So, I went on vacation with mixed feelings. Secondly, Romania is a beautiful country with absolutely atrocious roads. It is a constant effort to keep one's internal organs in their proper places. The food ranges from average to nauseating. Getting food poisoning didn't add to my opinion. We are staying in mostly B & B's (breakfast not always offered). These ranged from not very clean to downright moldy. After four days, I was ready to go home fed up. This is very odd for me. I love traveling, and never get homesick, even when the conditions are primitive. It's usually the rest of the family that gets pangs of homesickness around the ten day mark.
We are of course following the events at home closely. Each soldier killed or wounded hits us. Three soldiers from my village have been buried. More than usual, the glue that binds our nation together is felt strongly, even overseas.
A few days before our flight, the war had started, and I took part in the treatment of the wounded that arrived in the trauma room. I'm no more in my element than when taking care of the wounded. During those couple of days, I felt more connected to my profession than I had in the last year.
Leaving on vacation felt like desertion. That feeling is at the crux of my dissatisfaction here. All my nitpicking is secondary. On the one hand, it is good, especially for the children, to escape the constant tension of air raid sirens and rushing to the shelter. On other hand, there are the pangs of homesickness and of wanting to get back to the action.
I was overwhelmed with emotion this past Sabbath Eve. Tearfully I added psalms and the prayer for the protection of our soldiers to the usual Sabbath blessings. In a few days we'll be home, and I will be back doing what I should be doing, treating the sick and wounded.
Posted by Unknown at 11:41 PM 7 comments:

This classic album was recorded in 1962 and reissued this year. It is a piano trio with the seemingly unlikely collaboration of the elegant Duke Ellington, avant garde Max Roach and enfant terrible Charles Mingus. This is an absolute masterpiece.

A Crisis of the Spirit

It's been too long since my last post. I know. Even then, posts were few and far between. The truth is that I've been depressed. Not full blown major depression that incapacitates, but frustrated, down in the mouth, pissed off with man and God and generally dejected and despised.
The start of it began with the frustrating working conditions of the hospital. There is too much work, and not enough staff, especially the non-medical but equally essential type that includes orderlies, technicians and secretaries. The result is that everyone, but everyone, is forced to do other peoples' jobs. Since no one can do it all, a significant portion of the day is wasted trying to get someone else to do it, and there is a lot of conflict and belly aching all around.
Then there was the trigger: During our morning meeting, I was making a point that supported the Boss's opinion. However, being hard-of-hearing, he misunderstood and thought I was criticizing his opinion. He silenced me in a most brutal and Stalinistic fashion (something not uncommon for him).
It pushed me over the edge. For several months, I hated waking up in the morning to go to work in place that caused me so much suffering. In turn, I became insufferable. I didn't talk to anyone. Known as somewhat of a joker, I stopped telling jokes. I didn't smile at anyone. I ate lunch alone. Basically, I was breathing fire and brimstone in all directions. Even while parking the car in the morning, I couldn't wait to leave to go back home. But even at home, I was insufferable towards my wife and the kids. I became the very thing that I hate most: I was feeling sorry for myself.
My epiphany arrived in the form of one of those "inspirational" television programs. It is the local version of "undercover" boss. The story that made it's impression was about a young woman, and immigrant, who was working to support her family while serving in the army. The father had abandoned the family and left them with debts. She probably could have been exempted from army service based on economic hardship. However, she chose to serve. I assume that she holds some clerical position that allows her to work in the evenings and weekends. So she works the night shift in a pizzeria and from there goes to her army day job. She has been living on 2 hours of sleep a night for the last 8 months! And she still manages to smile and give the customers excellent service.
As banal as it sounds, I sat up an took notice. And then I was embarrassed. What do I have to complain about? So I made a conscious decision to snap out of it and get back to work. To hell with the management of the hospital, that makes our work so difficult. To hell with my boss and his uncouth ways. I will not let them interfere with me being the pro that I am. Damn it! I will not let the bastards get me down anymore. 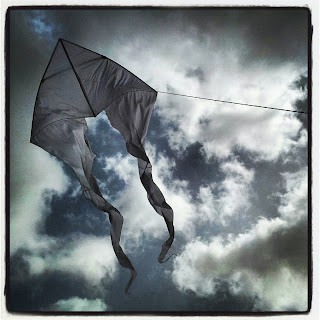 That beauty is the Ghost Delta from Gomberg Kites.

Can you say Intrathecal?

Today I provided sedation for an unfortunate baby girl 8 months old with leukemia who needed both an intrathecal injection of methotrexate, a chemotherapeutic drug, and a bone marrow biopsy. Just before I arrived in the hematoncology ward there was an air raid siren. We entered the bomb shelter and waited it out. We counted the explosions...one...two...three...after about 12 we lost count. Later on the news channel reported that there were 20 missiles fired at Be'er Sheva at once. Three got through the iron dome and landed in the city. Thank God no one was injured.
What made this child noteworthy, is that she is from Gaza. Actually, it's quite common. We treat many patients from Gaza. Even during times like these when we are being attacked from Gaza.
I asked my pediatric hematoncologist colleague if there are any specialists in Gaza. She answered that there is one in all of Gaza. He has the knowledge and experience to treat these children. The problem lies elsewhere. They don't have the special drugs needed to treat children with cancer. Apparently, for the Hamas terrorist government, money is better spent on missiles, mortars, rockets and other weapons of terror.
So, all the children in Gaza with cancer, all of them, are treated in Israel.
Even at times like these.
Posted by Unknown at 5:39 PM 10 comments:

In a flash of comic genius, Jerry Lewis produced, wrote, directed and acted in a movie called "The Bellboy". Lewis plays, of course, a hapless bellboy who is sent on all manner of errand which all end up terribly bumbled. It is not a silent movie, but Lewis is silent throughout. That is, until the final scene, when the hotel manager asks him why he has never spoken:

So I haven't posted these many months, not because I had nothing to say, but because no one asked. But now, in light of the events in my country, I received a comment from one of the few readers that haven't forgotten me. And I am unable to remain silent, now that someone asked.
Seaspray wrote the following comment completely off topic to last post that appeared:
"...I just want you to know that I've been thinking about you and all of Israel. My heart breaks for you and I continually pray for your safety."
So to Seaspray and anyone else who share these sentiments: Thank you. Your prayers and support are greatly appreciated.
The situation here can be described as ranging from not so bad to catastrophic, depending on one's physical distance from Gaza. Luckily, for my family, we are not in the direct line of fire, so while there are infrequent air raid sirens, there haven't been any direct hits in our village. The people most affected are those closest to Gaza. They are basically living in bomb shelters. It is these civilians who have been suffering like this for the past 10 years. Almost everyday they have weathered mortars and missiles that have gone unnoticed by the international media. That is the hypocrisy, only when we retaliate does the world take notice, and censure us. To be sure, the civilians in Gaza are suffering terribly. They suffer many more casualties than we. This is not merely because of our military might, but principally because of our different ideologies. While prepared for this war by building bomb shelters and defensive measures like iron dome, the Hamas-run government has used the considerable funds provided by the U.S. and EU to arm themselves with weapons whose only purpose is to terrorize Southern Israel. While we embrace life they embrace death. They don't deny it:

That is why they die and we live. That is why even while they terrorize us with missiles fired from civilian areas, stockpile rockets in schools, mosques and hospitals, we treat their sick (who are allowed to cross into Israel) along with our sick and wounded. This is our moral strength and their moral weakness. This is why we will prevail.

So Seaspray, now that you've asked, I answer your concern with this:

"Our lives begin to end the minute we become silent about things that matter."
-Martin Luther King Jr.

Smokers who enter my pre-anesthesia clinic usually get more than food for thought. This video does it nicely in a non-preachy way. (h/t Treppenwitz)

Which freezes faster, hot water or cold water? It's obvious, isn't it? Before you make up your mind, watch this:


This effect has been known for centuries and was first described by Aristotle. In modern times it was rediscovered by Erasto Mpemba in 1963. He was a Tanzanian schoolboy at the time and noticed the effect while preparing ice cream in a cookery class.
Here is a layman's explanation.
For you physics braniacs here is a technical paper outlining 7 experiments.
Amazingly, such a seemingly simple (yet counterintuitive) phenomenon still has no conclusive explanation.
I'm wondering if the sun will rise tomorrow morning.
Posted by Unknown at 11:17 PM No comments: