On the cel phone my wife was sobbing, "Thank God!" and she hung up. My temperature must be up again, I'm having an auditory halleucination. My wife is actually thanking God that I have pneumonia. I'm definitely hearing things. "Nurse!" I call out, "get me a psych consult...for me!"
Let me start over. Most people have one Yiddishe Mama, the biological one (Hi Ma!). I have three:
1. My actual mother.
2. My mother-in-law.
3. My wife.
Of the three, my wife is the most accomplished. To be sure, it is genetic, her whole family are master worryworts. And they have taken Hyphochondria by Proxy to completely new levels. Every cough, rash, sneeze, pain, tingle and premonition in a family member is cause to seek expert consultation.
About four months ago I was hit with the ol' one-two punch. I got the common cold and then when I recovered, I got it again. I was pretty worn out. Since then, I've had this cough. Just a dry cough and a constant tickle in my throat. It got to be so routine that I didn't even notice that I was coughing.
Eventually, my wife and mother ganged up on me. "Go to the doctor!" "But I feel fine, besides I'm too busy". Both were true, I felt fine and I was very busy.
But last week, I developed a fever. It started in the middle of a very long operation. The surgeons had the air conditioner on full Siberia mode. And I felt awful. I took a surgical drape and fashioned a balaclava out of it. So, the next day I called in sick and went to my family doctor. "Your lungs are clear, it's probably just a viral infection. No cause for worry." (I've used that line myself many times) "Good, I can finally reassure my wife the hypochondriac by proxy." He laughed.
A few days later, my cough got worse, more productive. I went back to the doctor and this time He heard crepitations in my right lung. "You've got pneumonia." OK, Emergency Dept. here I come. First I went home to drop off the mail and tell my wife. I was met with the patented hypochondriac-by-proxy-gaze. She looked more worried than ever. I tried reassuring her, "It's just to get a chest xray to confirm the diagnosis. I'm fine, really." The gaze became a black cloud.
I went to the ED in the hospital I worked in for ten years and received the royal treatment. I was actually enjoying myself seeing old friends and co-workers. The most senior internist in the ED recognized me and took my chart even though any resident could take my case. A couple hours later, after blood work and a chest xray I was the proud new owner of a right middle lobe pneumonia. See? 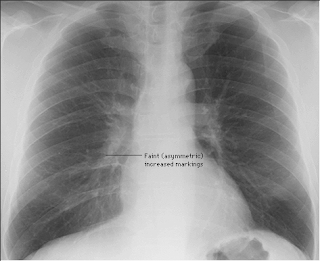 Well It is actually hard to see if you're not trained to see it.
Anyway, then transpired the conversation that began this post. I must be insane, my wife is relieved that I have pneumonia? When I got home I was greeted with that "I told you so" look. That too is patented. I swear, I'll have "My wife told me so." engraved on my tomb stone.
It was only today that I asked my wife what she was thinking when she thanked God that I had pneumonia. "Something worse, much much worse."
"You mean cancer?"
"Don't say that word in this house! Besides, your mother must think I'm a loony toon."
"Oh, Oh. Why?"
"Because, when you were in the ED I phoned your mother. She said it was probably pneumonia, and I said "I hope so.""
Just for the record, had I gone to the doctor a month ago, he wouldn't have found anything. I was assymptomatic (except for the cough), my lungs would have been clear on auscultation and the chest film would have been normal.
But "I told you so" just can't be lived down.
Posted by Unknown at 9:05 PM

This thing you've been carrying around with you for months... it isn't catchy is it? I mean, we did share a yogurt shake and all...

Oh, yes, very contagious. Especially had I sneezed an olympic sized juicy Yonah-sneeze on you.

I'm married to the male version of your wife. At Chez Mizrachi, it went thus: I was having trouble breathing going up the steps... finally was ordered to the doc... My Dearly Beloved was gratified (and validated) when it turned out to be "only" bronchitis, instead of The Disease That Cannot Be Mentioned In This House. Perhaps they are from the same soul chain.

As an aside, you and Bogner would be gross to actually dine with. I'm just visualizing... ;-)

I am the above mentioned "actual biological mother" and I have a few comments:
1. Pardon me, but I am not a Yideshe mama. I am a Sabra and proud of it
2. Hypochondriac by proxy??? me??? Please!!!
3. Next time you better listen to your mother or else.
4. Oh, by the way, I hope you feel better
5. I WILL BE CHECKING ON YOU A LITTLE LATER TODAY

Trep SHARED a yogurt shake with you???? He must have been dying of hunger or thirst to take a chance like that.

Glad its not that Disease-That-Cannot-be-Mentioned.

I think you, Bogner AND Ruti would be loads of fun to dine with!

I recently came accross your blog and have been reading along. I thought I would leave my first comment. I dont know what to say except that I have enjoyed reading. Nice blog. I will keep visiting this blog very often.

LOL! I can relate to your wife.. believe me.

Why is the OR kept so cold. is it so no respectable bacteria would thrive there or is it because the surgeons get how working under the lights or something else?

I have a friend who years ago seemed to suffer one ailment after the other and she joked that on her tombstone..she should put, "I told you I was sick." :)

The OR is kept cold for both reasons.

OMG I can't see anything! I'm a rotten vet! I canNOT see it!

Lioness - the x-ray is a subtle one. the real clue is the air bronchogram at the hilus of the right lung.

My mother in law is doing this with her grandchildren. I am concerned because it is interfering with their schooling. The school even suggested that she may have Munchausen's by proxy. I know it is not intentional, which is required for the label Munchausen's but the effect on the children is similar. Is hypochondria by proxy a recognized disorder?

Hypochondria by proxy is something I made up. But I'm convinced that it actually exists.