Like everyone else in this country, I was glued to the television all day. Despite having worked 24 hours straight on call and total exhaustion, I just couldn't go to sleep. So if this post seems a bit incoherent, please forgive me. I was compelled to watch Gilad's homecoming. Like many, I was incensed by the insensitivity of the Egyptians trying to cash in on a scoop with this clip of Shalit being interviewed by an Egyptian Cow. The interview was conducted without the consent of the Israeli side. The claim that Gilad consented is trite. He was still in the mindset of a captive. But in retrospect, the Cow did us a great favor. This unassuming young man has emerged a bona fide hero. He was kept in solitary confinement for over 5 years, he is emaciated and malnourished, lacks vitamin D due to the lack of sunlight, and had some obvious injury to his left hand. Surprisingly he seemed in good spirits. In addition it seems to me that he did not develop the Stockholm Syndrome.
He kept his wits and answered eruditely to all questions. Even when the Cow tried to trap him into a political question about working to release Pali prisoners, he said the right thing: That he would be happy for their release provided they stop their violence.
I was astounded. After 5 years of contact only with his barbarian captors and with no opportunity for intelligent conversation, this remarkable young man showed the world his true mettle.
If a hero can be defined as an ordinary person performing extraordinarily in extraordinary circumstances, than I posit that Gilad Shalit is a hero. What joy for all of us, but especially his family to have him returned. Despite my own reservations concerning the prisoner swap, today is a day for joy. Tomorrow we can debate and argue about the price we paid for his return. The contrast with the vile thugs and murderers that were released is blinding. (No, I will not sully my blog with images of those vile fiends.) Shalit is thin and pale. The terrorists are well fed and tan. They had family visits, good food and excercise. Shalit had none of these. So let's just state for the record, our enemies are war criminals, barbarians, amoral and despicable. What comforts me, is that with Gilad's return, we received a treasure, while the Hamas and the PA received a heap of crap.
I was also happy to see that Gilad upon arrival in Israel dressed in his uniform. I intuitively feel that it is important that he make a necessary gradual transition from a military life to a civilian one. He is, after all, still a soldier. I was proud to see the symbol of the tank regiment we have both served. I hope he is still proud too.
Of all the emotional images today that literally brought me to tears, this one is my favorite: 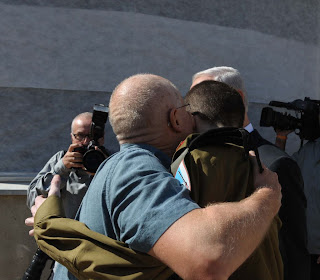 It is the very first moment of the first embrace between father and son after over 5 years. It is a very powerful image precisely because we don't see their faces. And that makes it all the more intimate.
Gilad Shalit, comrade-in-arms, fellow citizen and fellow Jew: Welcome home. I salute and embrace you, an accidental hero.

Your post has moved me to tears QL. I too liked that picture the best. It's such a human picture, we can all identify with it.

As to the Egyptian interview, Gilad's words were (deliberately?) mistranslated by some news outlets to make it sound as if he's become a lefty peacenik. In reality he handled the interview brilliantly and answered those awkward political questions very deftly, especially considering the extraordinary circumstances.

I would vote for him for PM any day!

It was touching how one of the many news programs yesterday mentioned that 5 different uniforms were prepared for Gilad's return. Since his physical condition was unknown, 5 different sizes were prepared, so that he could look his best.

We have it good in Miami, compared to you guys. Powerful blog.

I have it posted in the "Anesthesia Blog" section at