The Potato Festival and Other Stuff

In general, it is great to be on vacation. There are the highs and lows of course.
The 4th Annual Potato Festival was a complete bust. To make it worse, I dragged the Bogner Family (of Treppenwitz fame) to the disaster. I hope that they forgive me. The only thing that made me feel better was that there were several thousand morons just like me who also attended. The day was not a total loss as we had a tasty lunch at our favorite eatery.

Zehava and I traded family faux pas stories. (I believe we are cut of the same cloth in that respect.) Her tale had us reeling with laughter. I can only divulge that the epic will heretofore be known as: "The Great In-Law Incident of '09".

Another highlight of the vacation was the hike through Wadi Mamshit which winds just adjacent to the Nabatean ruins of the same name. Despite the seemingly harsh desert environs this was an easy hike that even our three year old managed (we kept him going during the rough bits by promising that he would scale a volcano, it worked.) Here are some pics: 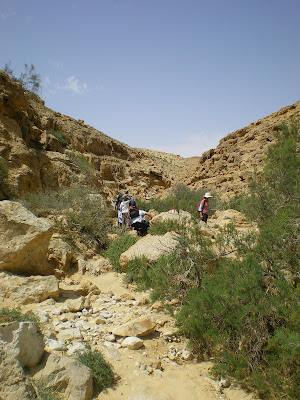 There is a surprising variety of flora and fauna and this being the end of a rather short rainy season we were lucky enough to see some desert flowers. Although difficult to see, we spotted two hyraxes high up on the cliff face. Here is a pretty good video clip of a hyrax "singing": 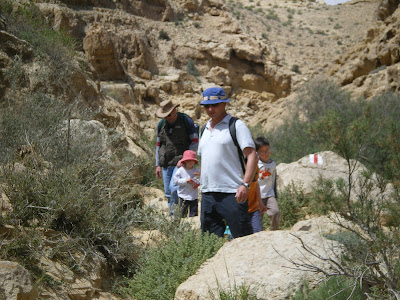 That's me with the Aussie bush hat (Nothing beats a good wide brimmed hat). A friend and my two boys. 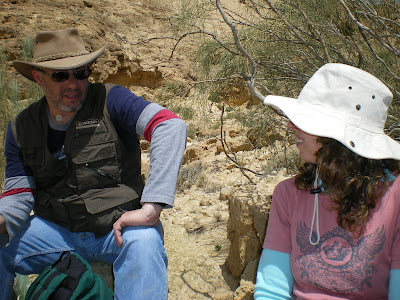